Snowy landscapes and Arctic animals are the main themes of Wild North, an online slot game created by Play ‘n Go. The game is full of imagery of snow-filled tundra, towering spruce trees and a variety of native animals, including owls, reindeer, bears and wolves. The game plays out over 5 reels and 40 paylines and offers wild and scatter symbols.

The bonus games featured in Wild North are triggered by scatter symbols, and players will be randomly awarded one of 7 different features. Each of these features offers a different prize, including free spins, sticky symbols and a Pick Me style feature.

An icy winter scene forms the backdrop for the Wild North slot, displaying a crisp dawn sky, a snowy plain and rows of frost-covered trees. The reels of the game are completely transparent, which brings more attention to the detailed reel symbols on them.

The reel symbols themselves are filled with an assortment of native animals and a graphic of the Northern Lights, and the lower valued symbols in the game appear as though they have been carved from wood in a traditional tribal style, giving an overall impression of an icy land where wild animals are dominant.

Players will find 4 main reel symbols in the Wild North slot by Play ‘n Go, each of them depicting a different animal. Bears, wolves, owls and reindeer make up these main symbols. Also featured are the standard playing card symbols 9, 10, J, Q, K and A, which make up this game’s lower valued icons. 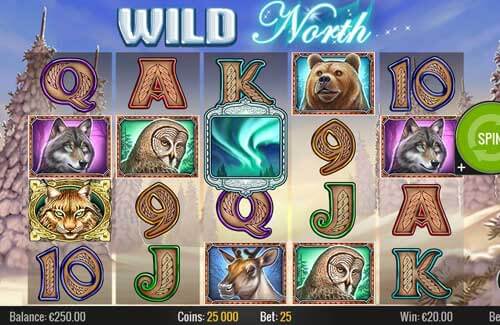 The wild symbol in Wild North is the Wild lynx symbol, which can replace any other symbol in the game in order to complete winning combinations. The only symbol that the lynx wild cannot replace is the scatter symbol.

The Northern Lights act as the scatter symbols in Wild North, and landing 3 or more of these anywhere in view on the reels will activate the game’s main bonus feature.

Once 3 or more scatter symbols have landed on the reels, the Northern Lights bonus game will be activated. Players will then be awarded one of 7 different bonus features by a bonus wheel, which will randomly allocate a feature each time the game is triggered.

The features included in the Northern Lights bonus game are The Great Wilderness feature, in which 3 free spins will be awarded and a 4×4 mega symbol grid will appear on reels 2, 3, 4 and 5, and the Wild Lynx feature, which also awards 3 free spins and turns 1 or 2 reels completely wild during every free spin.

Each of the remaining bonus features, which include Savage Bear, Running Reindeer, Eyes of the Owl and Wolf Pack, offer just 1 free spin, along with various extra features such as grids of sticky symbols, random multipliers and the chance to earn extra free spins by landing symbols specific to the feature being played.

The Wild North explorer is the final bonus feature in Wild North. This feature will provide players with a 4×5 grid of tiles from which they must choose to reveal cash prizes, an animal feature symbol or a red cross, which ends the game. If players uncover The Great Wilderness or the Wild Lynx features, those features will play out and the bonus game will end. If players uncover any of the other animal features, the feature will play out and players will be allowed another pick.